More of my tangles in this one, as monotangles. Prob is they don't really sit together very well, so maybe cover two while you look at one! Fraid I'm not that clever to separate them in such a way that they can appear on the blog seperately, and I dont have photoshop on my laptop, so there we are. I used the numbers for the strings.I was disappointed that the image on screen wasn't as good as the original and was informed today its cos the res isnt high enough on the scanner. I have SOOOO much to learn yet to make my blog better! PLease be patient. Ive begun to put some of my paintings on page 2 but have yet to learn how to put a link to it on the home page! Duh.

First class of the year tomorrow. I learnt today its all girls. Yay. 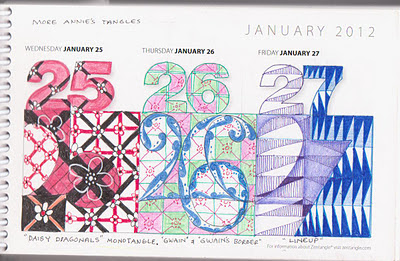 Now for something out of left field. This morning I was inspired to write an anagram for faith, which I was quite pleased with as I am doing a staff devotion this week. It may not be exactly what an anagram is as its sentences but anyway, see if you like it.


F .....Free!  ("For by grace you have been saved through FAITH, it is the GIFT of God"
Eph.2:8)
A......Accounted for righteousness
("But to Him who does not work but BELIEVES on Him who justifies the ungodly, his FAITH is ACCOUNTED [evaluated] for righteousness")
I.......a personal decision to believe

T......The cross of Jesus is the key to eternal life
H......Heaven is where you transfer to immediately you "die"  ("I am  the resurrection and the life. He who BELIEVES in me , though he may die, he shall live. and whoever lives and BELIEVES in Me shall never die." John 11: 25,26)

Just remembered I did a calligrahic piece on this last verse. Maybe you'd like to see that. It won  first prize in an art show. How about that. It took me 53 hours to do! 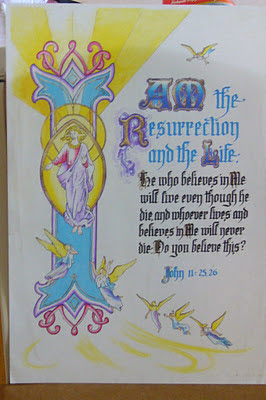 Ye-hah! This is my 100th post today!!
I must say its been fun though time consuming but I have no regrets at all. In fact I have enjoyed running a blog, and linking up with folk around the world, especially those who have similar passions. After a while you do feel like a community, particularly the zentangling  contributors. And a big THANK YOU to those who have left comments.."I couldn't have done it without you".

I am going slowly with Carole's calendar, I have been taking too long to work on them. Today I have a different focus. I thought I would showcase my tangles for a change as either "biggerer" or as a monotangle, which will be on the next page. I had fun colouring them as well with my Prismacolours. 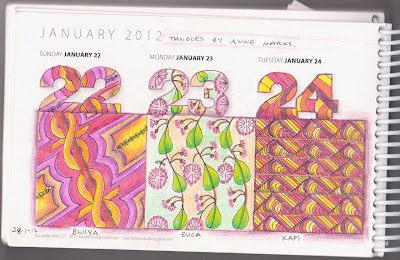 As today is Australia Day holiday and hubs keen to watch test cricket, I joined him and completed the next page on Caroles calendar. Must say I am grateful to Carole for this encouragement to press in to work daily. Its a good way to develop and increase ones creativity. 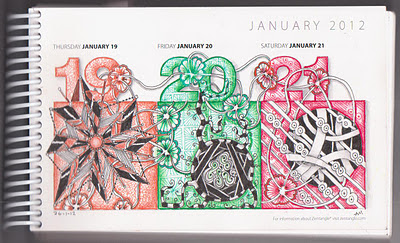 Posted by Precious Worker at 23:24 No comments:

I enjoyed this challenge, playing with Artoos name. We were asked to work with the Moebius Syndrome's logo, considering Artoo, Laura's son who has the syndrome. It was so nice to do because I kept thinking about Artoo as I created it. He seems such a sweetie and the family so brave and caring. I wondered if I might colour the background, so if I do I shall repost! 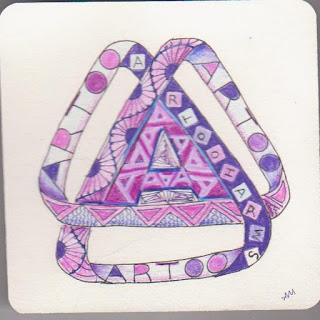 Thinking of children, my grandaughter Adrien (just 9) sent me a picture. Last visit to the family in September, I taught the 4 girls how to tangle. Though the picture isnt actually a tangle, some of the patterns can be recognized. 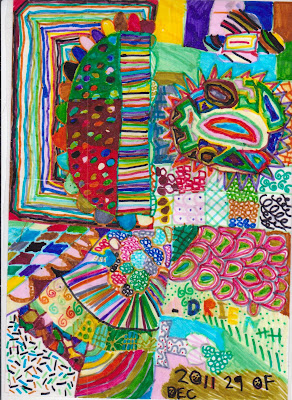 Posted by Precious Worker at 18:06 No comments:

Just returned from 4 days away at Victorias spectacular mountain range the Grampians. Whilst it was quite hot mid 30's, we did our walks in the morning early while the weather was cool, then toured a bit and  home for lunch and a swim. As my friend Jan is a phys ed teacher and mad on tennis, the Australian Open was on for arvo and evening. No probs for me as it was a chance to  catch up with the calendar pages. My first one here is a bit wild as I was having a go at Margaret's idea of an up and down drupe! The second I was quite happy with, this one inspired by Carol large ribbons. 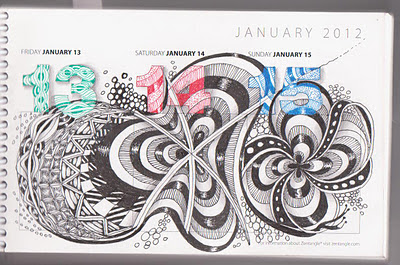 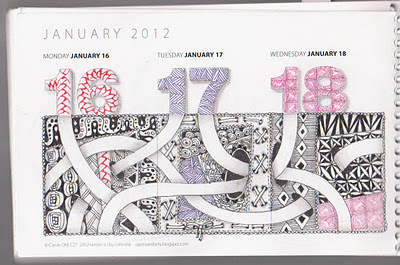 Email ThisBlogThis!Share to TwitterShare to FacebookShare to Pinterest
Labels: calendar13jan+16

I had fun doing this but not so wrapt in the result! I started with flowing ideas but it took ona mind of its own! Never mind, all part o f the journey. 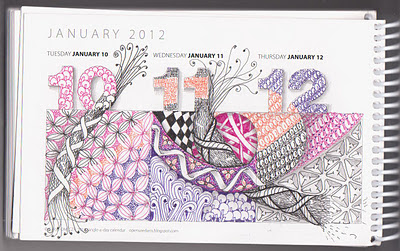 I was wrapt to see the word 'purple' in Diva's challenge this week. Encouraged to colour, yey! 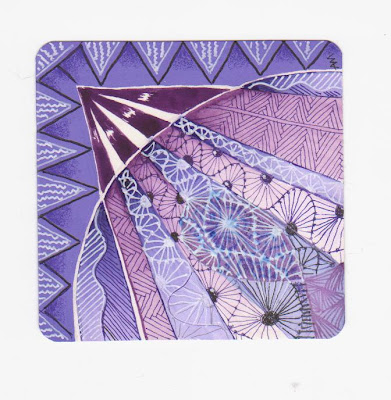 I wonder how many of you are having as much fun as I am using Carols wonderful calendar!
I find the paper is fabulous to work on, so smooth and so white.

I began simply doing a 'normal' tangle in the square, and just to add a difference, thought I would do the number in colour and incorporate that colour and tangle somewhere in the tangle.

This was until I saw Carols awesome artwork!!!!
My plan changed then to learn from what she had done, and follow her design ideas. Oh dear, now I have got all teacher-fied and even made a template to do this on so I could Keep a journal showing her work, some notes about the design which I could apply to my design, and a copy of my design underneath. I think if I DO keep this up I will learn masses of stuff about design. I realise I am still very tight with my work and need to loosen up somewhat. Maybe I shall learn during this process.

My pages so far 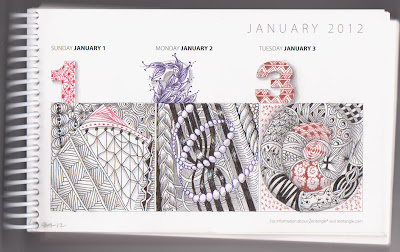 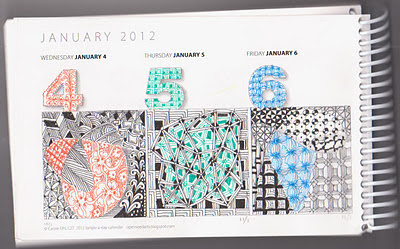 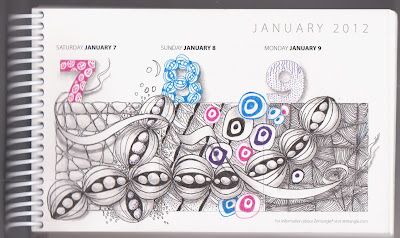 So you can see the difference after Carols inspiration! (7-9)
If anyone is interetsed, heres the template I plan to use. 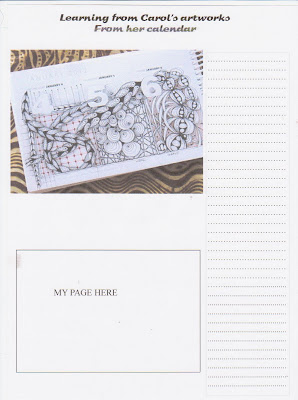 Oops, bit of bad gammar there, have to change that!

CONCERTINA TANGLE BOOK
Some have asked for some instructions as to how I made the concertina zentangle book.﻿ I really made it up as I went along, but will try to get some info to you asap. Must admit, its very handy having them all in one place and in a small book. It will take 480 patterns!!! I put in 2 pages with no patterns on, ready to fill in as new ones come along. And for the proverbial mistakes, I have a pile of 4x4cm square papers I managed to find at a Paperific show!! ttfn.
Posted by Precious Worker at 22:57 5 comments: 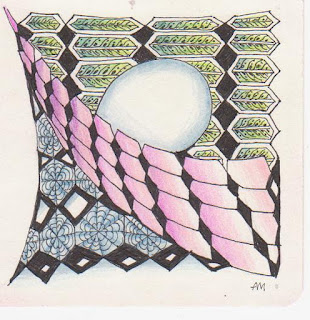 Hoorah, its loaded at last!! I have a new interface for my uploading now. Technology hey.....
Posted by Precious Worker at 00:09 4 comments:

So great to have the Diva back again! Really missed her blog and the community. Interesting challenge to use the pattern Undine. I love the connection with 'undyin' love! Couldn't help adding a bit of colour (Derwents).

Email ThisBlogThis!Share to TwitterShare to FacebookShare to Pinterest
Labels: undine

High priority this week is to sort through all my "stuff" which was removed from my study to make a bedroom for my daughter returning from UK. When I have finished I will post some before and after pics. In my sorting I found some things I made when I belonged to a Calligraphy group in Melbourne, one of which was a mini concertina book. I am quite into concertina books at present, having just completed one with tangles in it. Recently I have been creating inchies, so thought I would put a strip in one of these little books, except I made the tangles one and a half inches square. 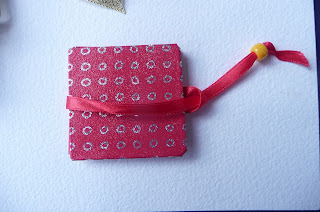 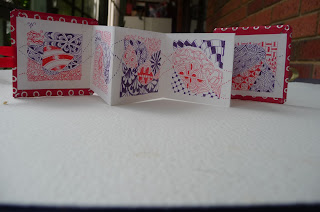 Heres another idea but this time I shaded it. i didnt think the red and purple needed it, but the green and blue did, not having enough contrast. Have yet to make up this one.

Not long after I began to create zentangles last year, I wanted to keep all my tangles in one place. I started doing them in a visual diary, but that soon filled up.  I wanted to make something which would have more room and the idea of a concertina book developed. I decided on a size which would be easy to use and made a trial page, long enough to contain 5 pages of 6 x 4cm squares on  each page and on both sides = 60 tangles a page! Once I had completed 4 pages I decided to think about putting it together, which was a bit of a challenge. Searching the net produced no suggestions. So I began the experiment and explore phase. Eventually I bound the eventual 8 pages together with material, sewing in the pages. This was attached to a  cover made from mountboard and covered with cotton fabric. Results follow... 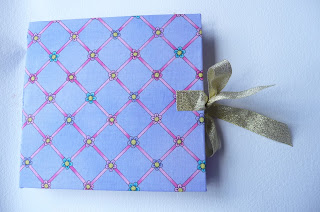 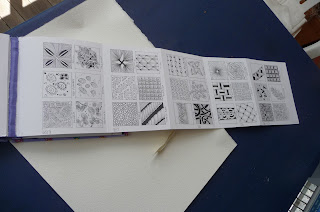 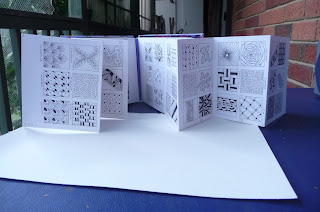 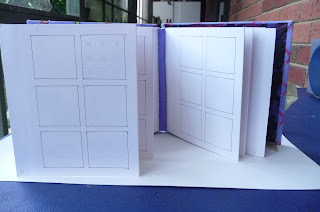 pages yet to fill in in the future.
Posted by Precious Worker at 20:00 7 comments:

I've been working on this one for a while now. I like to play with gradient methods and make things as bright as possible! Using Prismacolours makes this possible. 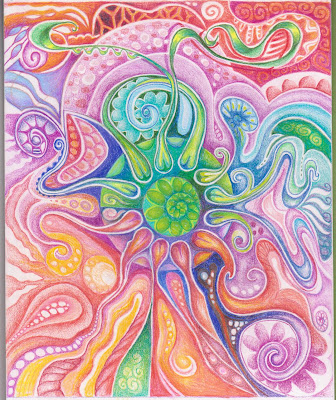