At last we have a decent amount of rain. What a relief after the hottest March on record. I'm gratefully on the up now. Just realised last night I have a 'Dare' to do! A monotangle using Mooka. Like others, I found it difficult to get the curly ends to fit in. So I improvised and allowed them to overlap. Found this a lot better. 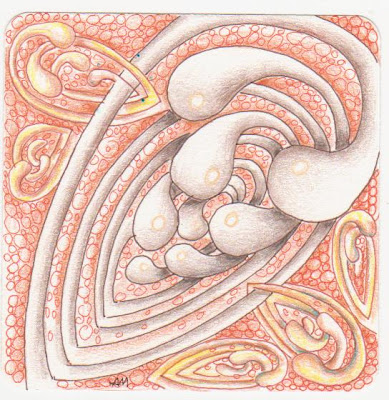 I certainly must be improving to do the Zenlala Dare after two Diva challenges!! I always find it  amazing that these designs seem to create themselves. I don't know what design I will do until I've done it!! 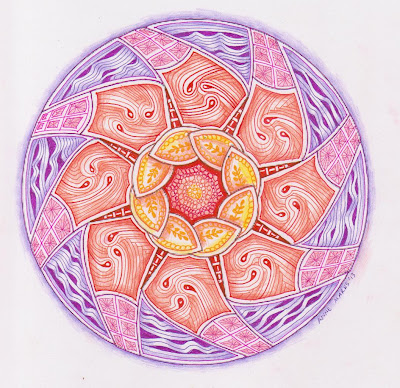 I am happier with this attempt at Diva's challenge #110! I think it reflects an uplift in me maybe. 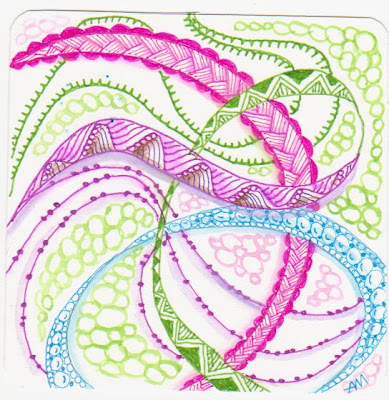 Hi all. Wont be writing much today but last night I actually did this weeks challenge .."go outside the box". The thing that caught me so I just HAD to do this one was to use watercolours!!! I just LOVE to use a fine paintbrush, so my work really didn't go outside the box but is larger than a tile. about 6" square. I wanted to do a bright one but it had a mind of its own and stuck to blue-green. So after I put a few dabs of red to cheer it up. I didnt really let go but then I am convalescing and thats my excuse. 12 days after the big op to do this ..3 hrs..I dont think is too bad. I must free up my work though. I really enjoyed using the No.2 taklon brush and the Cotman pan watercolours. 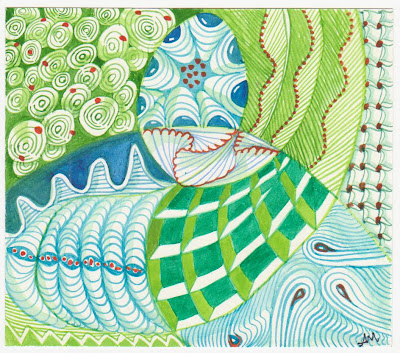 And many thanks to those who sent well wishes.﻿
Posted by Precious Worker at 19:50 5 comments:

you may have wondered about my silence and lack of posting this past week.
whilst in blog land a week isnt much really, to me this past 7 days have seemed like 7 weeks.
sorry no caps i dont have the energy.
what happened?
i had a bad stomach ache last sunday night the 10th.
i thought it was just a bit of wind, but by 5.30 next morning the pain was so bad i just collapsed.
i tried to get up and fell again.
my hubby was at the other end of the house and is half deaf, but somehow his ears were opened and he came to my assistance and called the ambulance.
i was operated on at 2pm that afternoon .
turns out i had appendicitis which burst .. say no more.
anyone who has experienced that will know what its like.
the antibiotics are rather debilitating and its frustrating when you cant do your art, watch tv or read a book!,
what else is there?
the blessing of friends calling is wonderful, but after the first wave they drop off.
hubby is wonderful but a computer person rather than a chatterer.
this is the first year of my retirement, so i have been used to days full of people and students to teach.
its so quiet its scary.
another thing with an experience like this is its brings you very close to facing death.
how morbid.
though i am a christian and have no fear of death, its always at arms length at least, not in your face.
if hubby had not heard me i may not be writing this.
but
i am writing this
i was not given over to death
god hasnt finished with me yet
the australian group 'hillsong' recently released a cd called 'cornerstone'
in the song they say
'throught the storm he is lord'
i am so grateful for that.

if anyone has been through this id like to know just when you get out of the doldrums!!!!
dont worry, ill be back posting pretty soon
thanks for listening.
Posted by Precious Worker at 19:46 9 comments:

I am finding the work of others a marvellous classroom in which to develop in the art of Zentangle. I see something and think "Oh, I will have to try that!" I'm sure I am not alone in that. Recently Margaret showed us some great ideas for Knighstbridge, and then pointed us to Donna Lacy's tangelation "Knightspeek", which is great fun. (sorry I'm not much on linking, you'll have to go to Margaret's blog on http://enthusiasticartist. blogspot.com to find these inspirations). 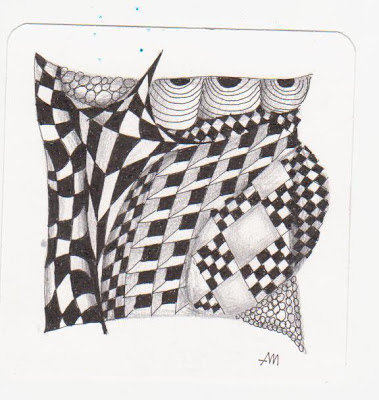 Following this wonderful exercise, I attempted something Maria Thomas shared on her blog at Zentangle regarding using the columns of a building as a string. I found this took a little more concentration﻿ and probably jumped in at the deep end before trying a simpler version. But I did enjoy it! Thanks Maria.  I will try some more down the track. 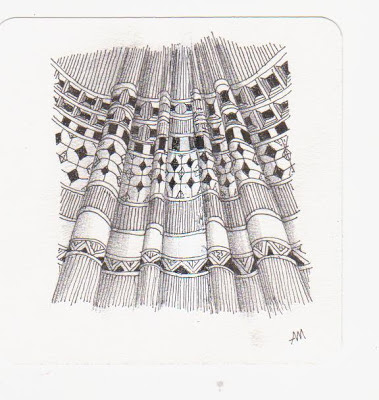 Email ThisBlogThis!Share to TwitterShare to FacebookShare to Pinterest
Labels: knightspeek

Oh dear Margaret! As if I dont have enough challenges going on and now you present us with another on your blog today!! How do you find time to do them all?? Well, as I cant resist challenges I think I might join in on Roy Stauffer, CZT at Mindful Creations﻿ blog challenge regarding monotangles. I do LOVE monotangle, making them different each time. This probably isnt a good start as it is all just one use of FIFE. maybe I'd better find anotherie...and just to let you know, I am cheating here and using 'one I had created earlier', cos I need some time to do the cooking and cleaning and getting ready for the Zendala Dare tomorrow. 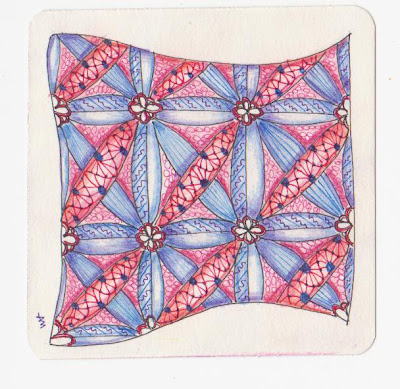 Despite our very hot day of 34 degrees, I managed to do the Diva Callenge today in our Art group. Jane's tangle "Whyz" is the The Diva's challenge this week. 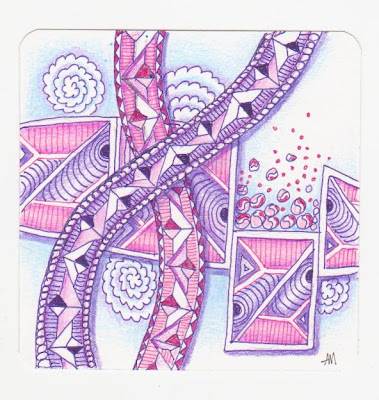 Email ThisBlogThis!Share to TwitterShare to FacebookShare to Pinterest
Labels: whys

challenge was to remove some of the lines.

Here is the first zendala completed on the original template. 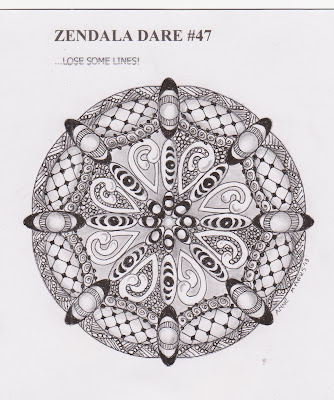 After I had removed the ovals and placed lines across the circle, I was tempted to do a tertiary colour wheel! I finished this off today. 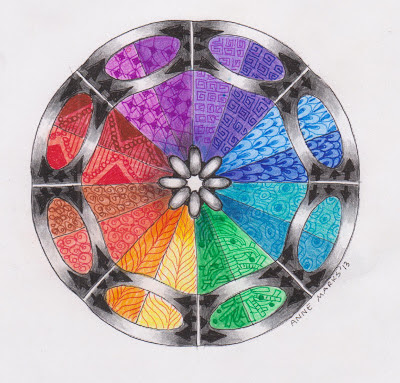 My Dare this week is rather late. I have been away to a small fishing and boating village called Metung in East Gippsland, where the grass was actually green! We've had such a dry hot summer everywhere else was quite brown, some places no grass at all. The population at non- holiday time is only 750, so it was delightfully quiet.
As it was so far away we had no access to the internet, so I couldnt post my whole sheet..yey.. I had time to do three designs. A few photos for you 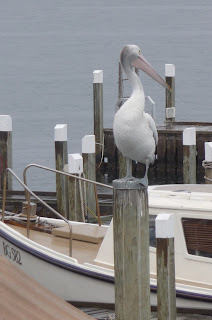